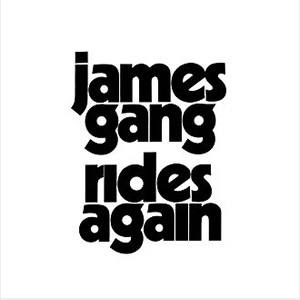 The James Gang reached the peak of their relatively short time together with front man Joe Walsh with their sophomore album James Gang Rides Again in the summer of 1970. The album combines their blues-based power-trio rock with a branched-out experimental method that incorporates keyboards into their sound and includes elements of country. While not a great commercial success, James Gang Rides Again was critically acclaimed and a great influence for many rock bands that emerged later in the decade.

James Gang was founded by drummer Jim Fox in Cleveland, Ohio in 1965. They were were originally a five-piece, British rock influenced band including bassist Tom Kriss. In 1968, Walsh was brought on to replace the group’s original lead guitarist and, after two prompt defections, the band quickly realigned as a trio to fulfill live commitments. With Walsh assuming lead vocal duties, the group decided they liked their sound and moved forward as a threesome. After signing with ABC’s new Bluesway Records subsidiary in early 1969, they recorded and released their debut, Yer’ Album, later that year. Sales for this album were disappointing and a new singer was briefly considered so that Walsh could focus on guitars. While deciding to maintain Walsh as lead vocalist, Kriss decided to abruptly depart from the band in November 1969.

Bassist Dale Peters was recruited by Fox just in time for recording of the group’s second album. Recorded in Los Angeles with producer Bill Szymczyk, the group wanted to replicate the energy of its ever-popular live shows, where the group would jam to new material in the dressing rooms before each show.  With the combination of low label expectations and the state-of-the-art equipment at The Record Plant, the group took a loose and experimental approach to the material on James Gang Rides Again.

The blistering opening track “Funk #49”, was a group composition that derived from a warm-up jam and initially ad-libbed lyrics by Walsh about an untamed girlfriend. The recording features a slight but potent percussion break by Fox before pivoting back to a final verse. The song was released as a single to moderate initial success but became a later staple on classic rock stations. The instrumental “Asshtonpark” features a slow rhythmic build up towards a country-esque groove featuring a generous amount of delay on Walsh’s guitar. The song’s title is a tribute to production designer Assheton Gorton. The catchy rocker “Woman” follows, starting with and built on Peters’ bass line with some great guitar dynamics to adding a dramatic element to the groove.

The album’s original first side ended with the excellent multi-part suite called “The Bomber”. Here, the musical talent of this emerging trio is fully exhibited, book-marked by the heavy, frantic verses of “Closet Queen”, which reportedly blew out the studio monitors at The Record Plant upon playback. The song’s mid section improvises a couple of established instrumentals, including Vince Guaraldi’s “Cast Your Fate to the Wind” and an electric rendition of Maurice Ravel’s “Boléro”, which spawned a threatened suit that resulted in certain editions of the track being edited to remove “Boléro” (since restored). In contrast to sound, but just as innovative is “Tend My Garden”, featuring Walsh pulling quadruple duty on vocals, organ, acoustic and electric guitar, a method (as well as a signature riff) that would be echoed years later by Tom Scholz of Boston on “More Than a Feeling” from Boston’s 1976 debut album. From the dissolve of the majestic “Tend My Garden”, comes the simple, homey, front porch country-blues of “Garden Gate”, a short minute and a half track which appears to be a solo performance by Walsh. 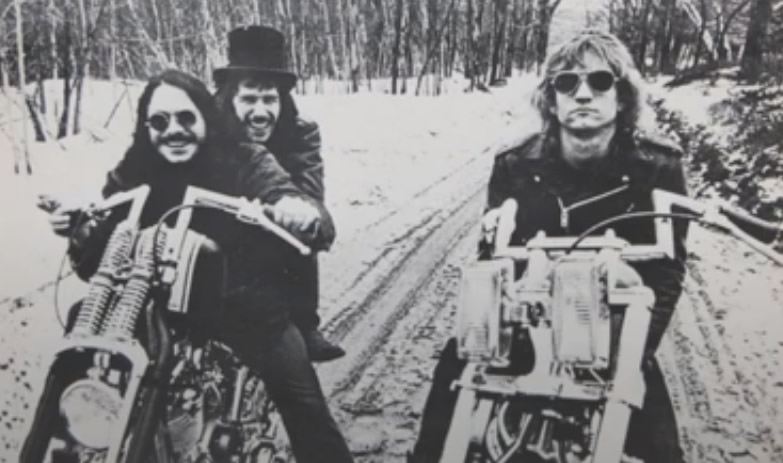 The whimsical “There I Go Again” may be closest to pure pop ever by James Gang (or Walsh for that matter). This catchy acoustic tune is accented by fine pedal steel guitar of guest Rusty Young. While remaining in the pop form, “Thanks” has a bit more complexity overall with an original arrangement applied to this short acoustic folk tune. “Ashes the Rain and I” concludes the album as a dark acoustic folk with heavy orchestration applied after the first verse and interlude. While certainly atmospheric and original, the decision to shepherd out this record with so much extraneous instrumentation seems like an odd decision by Szymczyk and the band.

Following the recording sessions for James Gang Rides Again, the group embarked on a tour opening for The Who in the United States in early 1970. This led to the group touring the United Kingdom and appearing on the British TV show “Top of the Pops”, which increased their international appeal. However, after 1971’s studio album Thirds and the live album James Gang Live in Concert, Walsh left the band the band at the end of the year to form Barnstorm. Fox and Peters continued the James Gang with several vocalists and guitarists through several more albums over the next half decade but never again would reach this level of artistic merit or sustainability before the group finally disbanded in early 1977. Yer’ Album is the debut album by James Gang,  displays this power trio’s genius and raw power through the compositions but also shows  their lack of recording experience due to the various filler throughout. Based in Cleveland, Ohio, it is clear that the group looked both to the East and the West for musical inspiration. This applies to their original compositions as well as the pair of covers. With a healthy dose of British heavy rock and California folk rock topping the trio’s Southern blues-flavored core, Yer Album is a celebration of all elements of the expanding world of rock and roll and the end of the sixties.

James Gang drummer Jim Fox was a member of the band, The Outsiders, who had a national hit, “Time Won’t Let Me”, in the mid sixties. After leaving that group, Fox wanted to form a group oriented towards British rock. He recruited bassist Tom Kriss and a guitarist and keyboardist to form the original incarnation of the James Gang. After several lineup shuffles during the group’s first year, Fox was approached in 1968 by guitarist Joe Walsh who wanted to audition for the group. As the group narrowed from a five piece to a trio, Walsh assumed lead vocal duties and would eventually be their most identifiable member.

ABC Records staff producer Bill Szymczyk was assigned to the group, a serendipitous move that began a long professional relationship between Szymczyk and Walsh. Szymczyk would go on to produce all three of the James Gang’s albums which Walsh played on as well as many of his solo albums through the 1970s and later albums by the pop group the Eagles, which Walsh joined in 1976. But long before the group was posthumously dubbed “Joe Walsh’s James Gang”, they were a legitimate power trio, with each given their own space to jam and demonstrate their musical chops.

First the frivolous and annoying. In the grooves of the at the ends of each side of the original LPs were the infinite spoken messages, “Turn me over” and “Play me again”. Such antics also pertained to the opening tracks of each side. “Introduction” starts the first side with an improvised string quartet which cross-fades to a strummed acoustic riff which then roughly dissolves into the first proper song. It is a bit ironic that the first proper song by a group featuring a guitar legend like Joe Walsh is so keyboard dominated as “Take a Look Around”. The verses and chorus are dominated by an out-front organ and a piano holding the back end, all built on calm textures and acid rock ambiance. The song is strong on melody and mellow throughout with the middle section cut by a slow but piercing electric guitar lead, which returns again in the outro with a fuller arrangement. After this song is an odd, but interesting, section with competing spoken words and phrases.

“Funk #48” contains the simplest of grooves and lyrics in the simplest of songs, albeit still very entertaining and a great contrast from the previous song. Szymczyk commented that the song started as a sound check warm-up riff but quickly developed into the funk/rock groove, driven by the rhythm section of Kriss and Fox. The second half of the first side contains a couple of extended renditions of contemporary covers. Starting with a grandiose intro of piano and strings and interrupted by wild guitar interludes, the group eventually kicks into a rock-oriented version of Buffalo Springfield’s “Bluebird”. After a few verses, the song slowly meanders into a middle jam with exquisite drumming by Fox and texture-based guitar phrases by Walsh. The Yardbirds’ “Lost Woman” provides an extended showcase for each musician, particularly bassist Tom Kriss, who starts his showcase with a hyper-riff on bass and provides, perhaps, one of the most extensive bass solos in rock history. Most of this nine minute is an extended jam where each member leaves it completely out on the floor, especially the rhythm players, as the entire jam is much more than self-indulgence, it builds in tension and intensity throughout.

Side Two starts with more ambient noise, in the totally annoying “Stone Rap” before the beautiful, moody, and dark “Collage”, co-written by Patrick Cullie. This track could be the theme song for the entire album, as it truly is a collage of musical styles. The calmly strummed acoustic is accented by poignant but moody bass and strong drums and later some high strings and slight electric guitar join the mix. Overall, the tune is a real sonic treat and is original like no other. “I Don’t Have the Time” sounds (early) Deep Purple influenced as it is fast paced heavy rock, dominated by guitar overdubs and a furious drum beat, all while Walsh’s vocals carry an even keel, keeping the whole song grounded.

The final filler piece, “Wrapcity in English” goes back to the piano and string quartet with a melancholy, minor note and not quite as frivolous as the rest of the filler on the album. “Fred” is one of the odder songs on this oddest of albums. The organ returns (although not as much presence as on “Take a Look Around”) and first two verses have long and deliberate vocal lines for a somewhat psychedelic effect. In contrast, the middle bridge features an upbeat jazz/rock section with harmonized guitars. The twelve minute “Stop” feels like the most natural song for the band on the album – a totally legitimate power trio jam, which seems like it will never actually “Stop”. A great track for jam-band enthusiasts, especially those who lean towards the heavy rock/blues side, the group provides a parting shot to show the great promise for the future.

However, Yer’ Album would be the one and only album to feature these three together, as bassist Tom Kriss departed from the group by the end of 1969, making this a true capture of lightning in a bottle.