The Alice Cooper Band reached their commercial peak with 1973’s Billion Dollar Babies. This sixth Alice Cooper album, produced by Bob Ezrin, refined some of the basic rock grit of earlier work with the theatrical glam of the now famous (or infamous) live shows. The album’s title derives from the surprise the band felt about their massive success following their two 1971 albums and 1972’s School’s Out. They literally went from living together in a basement to one of the top rock acts in two years. The band’s leader Alice Cooper wrote the bulk of the album’s lyrics, some of which touched on very controversial subjects for shock value.

The album was first recorded at a mansion the band purchased called the “Galecie Estate” in Greenwich, Connecticut. Ezrin used various methods to achieve certain effects, including using a greenhouse with a marble floor as an echo chamber. The group completed the album at Morgan Studios in London, where the sessions became “party central” with many famous guests such as Harry Nilsson, Rich Grech, Marc Bolan, and Keith Moon stopping in, but all were too inebriated to contribute musically. Band guitarist Glen Buxton also struggled with substance abuse at the time and two session guitarists were needed to be brought in to finish his parts.

After the album was released, the band embarked on a massive tour that included 64 concerts in 59 cities in less than three months, which broke many U.S. box office records. These live performances featured Cooper doing skits that included tearing apart baby dolls and attacking mannequins while using several stage props and effects which required a crew of 40 to 50 people and used about 1 tons of equipment. This stagecraft all came with a cost as the tour, originally estimated to bring in $20 million, barely cleared $5 million.

Although the majority of the music on Billion Dollar Babies was composed by guitarist/keyboardist Michael Bruce, the opener “Hello Hooray” was written by singer/songwriter Rolf Kempf and was actually originally recorded by Judy Collins. This is a true show tune with soaring vocal melodies, a Bowie-esque rock arrangement, and a climatic coda section, which truly separates Alice Cooper from any of his shock rock successors like Marilyn Manson. “Raped and Freezin'” is an upbeat rock song with a temperament much lighter than the lyrical content. The lyrics tell of someone chased through the desert in Mexico and the arrangement attempts a Mexican-flavored end section, but fall just a bit short.

The sparse lyrics of “Elected” are nicely supplemented by energetic and entertaining music. This effect-laden song is actually a remake of an earlier band track called “Reflected” and the lyrics take the form of a campaign speech. Drummer Neal Smith provides stomping drum beats and Ezrin adds a cinematic touch with brass arrangements that complement the well crafted guitar riffs. The title song “Billion Dollar Babies” is riff driven and keeps Cooper keep his hard rock cred with guest Donovan providing background vocals. “Unfinished Sweet” contains some strong sound effects with the simple guitar riffs and vocals which mimic the primary riff along with a movie-like middle section with many more effects.

The second side begins with the satirical “No More Mr. Nice Guy”, a clever story song about the sheer outrage over Cooper’s stage antics. The music is upbeat and melodic with singalong chorus and a doo wop-tinged backing. The song was a Top 40 hit in the U.S. and Top 10 hit in the U.K. The album peaks with “Generation Landslide”, a unique gem which starts with blue-grassy acoustic riff before switching to a drum-marched infused verse with a throbbing bass line by Dennis Dunaway. Although not released as a single, the song became a live staple and fan favorite throughout Cooper’s career.

The rest of the album is dedicated to pure theatrics. “Sick Things” is a doomy and melodramatic tune dedicated to the band’s fan base with strong horn arrangements by Ezrin above a simple bass line. “Mary Ann” is a rare ballad where Bruce’s distant-sounding pianos offer sharp contrast to Cooper’s near-sounding vocals. “I Love the Dead” is, the most controversial song of Cooper’s career to that point with an overt theme that unabashedly promotes necrophilia. Although it was no doubt manufactured just for this shock effect, it may be a bit much for those who cherish some sliver of taste in rock and roll.

Billion Dollar Babies reached the top of the album charts on both sides of the Atlantic and would be the peak of the Alice Cooper Group. But just when it appeared like this hard rock band was about to step into the top echelon, tensions between the members led to a split after just one more album, Muscle of Love. Alice Cooper continued as a solo artist for decades to come while Bruce, Dunaway, and Smith went on to form a new group which took its name from this album, Billion Dollar Babies. 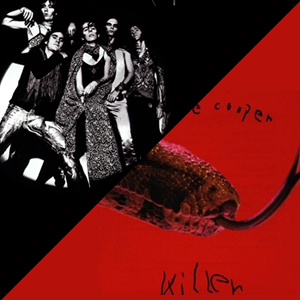 Due to his legendary live shows, Alice Cooper tended to get swallowed up by the stage persona that would come to define his career. But the foundation that preceded the stage act, was built on some very solid, very original, and very interesting music. In 1971, Alice Cooper was not merely the individual Vincent Damon Furnier, but was also a solid and excellent Alice Cooper Band which stood toe to toe with many of the more heralded groups of the day musically. Book-ending the year were two classic releases from this group, Love It to Death and Killer.

The band consisted of former members from the sixties rock band The Spiders, which Furnier joined as a 16-year-old in 1964. The Alice Cooper name and persona was adopted in 1968 and the following year they released their debut album Pretties for You. In 1970, the group recorded and released Easy Action, which was mired in production and censorship issues, temporarily halted the group’s momentum.

That all turned around in 1971, with the release of these two albums, which are similar in many ways. Both were recorded at the RCA studios in Chicago, with the same performers and the same producer, the legendary Bob Ezrin. These albums are also similar in tone and style, which took a quantum leap here from the band’s previous two albums. With this in mind, Classic Rock Review has decided, for the first time, to combine two albums into a single review.

If we were to compare these albums with each other, Love It to Death would get a slight edge overall, primarily because it is more complete throughout. This album also contains the brilliant “Ballad of Dwight Fry”, which is perhaps one of the greatest overlooked songs ever, due to it’s haunting original theme and the quality of the music itself.

The song has some perfectly layered acoustic, a crisp bass line by Dennis Dunaway, an organ rotation by Ezrin, and a crazy, moaning electric guitar by Glenn Buxton. A perfect backdrop for the spastic, insane vocals of Cooper, which draw heavy influence from the poetry and theatrics of Jim Morrison and The Doors.

Love It to Death also contains more diversity than its successor, with “Black JuJu” drawing from Pink Floyd circa Saucerful of Secrets and “Sun Arise” being nearly the polar opposite, a happy-go-lucky pop song in the vein of the AM hits of the day. But the core of this album is made up of straight-out rockers.

Guitarist and keyboardist Michael Bruce actually had a bigger hand in songwriting than Cooper himself and his songs are some of the most recognizable on either album. On Love It to Death, these include the upbeat “Caught In a Dream” and “Is It My Body”, along with the slightly doomier but brilliant “I’m Eighteen”, the biggest early hit for Alice Cooper.

But while Love It to Death is the more complete album, the best “side” of music is the first side of Killer. “Under My Wheels” kicks things off with a guest appearance by guitarist Rick Derringer, followed by “Be My Lover”, both of which are solid, accessible rockers by Bruce, and give the impression that this album will be much more mainstream than it’s predecessor.

However this notion is quickly dismissed, as the band launches into the progressive “Halo of Flies”, a King Crimson-esque virtuoso that features extraordinary playing, especially from drummer Neil Smith, and proves, without a doubt, that Alice Cooper was much more a band than an individual in 1971.

The side concludes with “Desperado”, an excellent and completely original song that alternates between a moody crooner and an agitated shouter. It was allegedly written as a tribute to Morrison, who had died in Paris shortly before the making of Killer.

After this solid sequence of songs on the first side, Killer runs out of steam on the second, as the material becomes a little thin and gets very repetitive. Nonetheless, this album is worth owning right alongside Love It to Death.

Over the next two years, Alice Cooper the band would put out three more albums and continue to gain in popularity. Unfortunately, the live show cast an ever larger shadow and the band broke up by 1975, with Alice Cooper the individual carrying on as a solo act for decades to come.