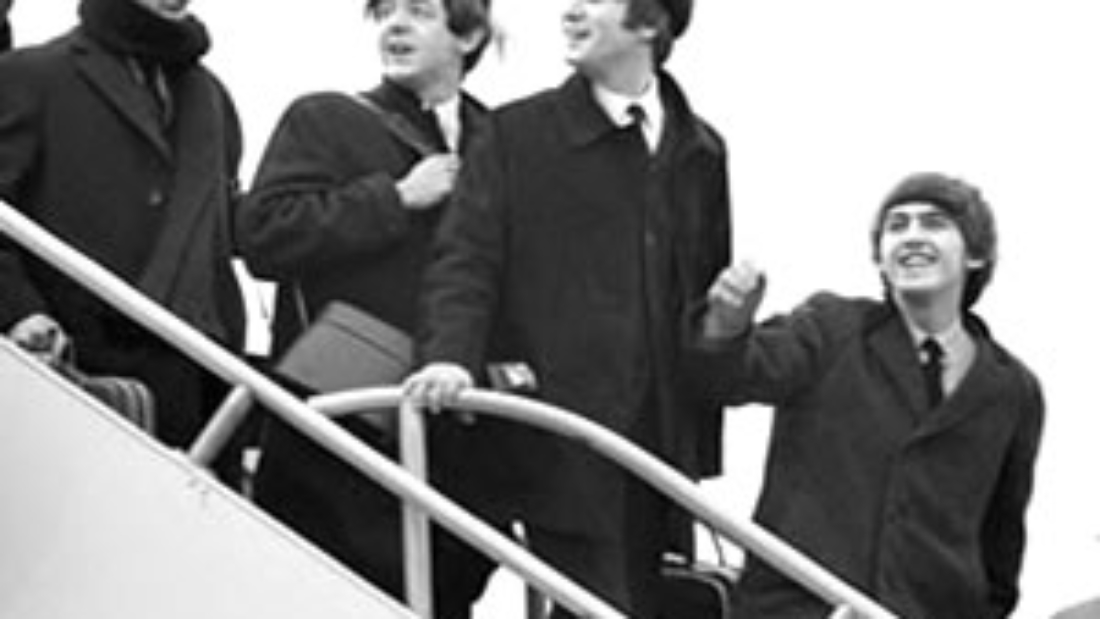 by Classic Rock Review with One Comment Special Features

The earliest year we will review on Classic Rock Review will be 1965. But this week we will cheat a little and look at the top moments from the preceding year, 1964, as we part from the 50th Anniversary of that historic rock n’ roll year. For the vast amount of rock bands that tour a foreign country for the first time, it is a rather unremarkable event for the people of that country. But on Friday, February 7, 1964, the British band The Beatles were greeted by over three thousand ravenous fans as they touched ground at the then-newly-minted John F. Kennedy Airport in New York. the group’s first stop on their initial American tour was a national television spot on the Ed Sullivan show, which drew over 70 million viewers on Sunday night, February 9th. This touched off a frenzy known as “Beatlemania”, which included an East Coast American tour, two more appearances on the Sullivan show, and climaxed in April, 1964. In consecutive weeks, The Beatles achieved chart dominance, the likes of which have not been equaled before or since. On April 4th they occupied the top five positions on Billboard’s Hot 100 chart with their singles “Can’t Buy Me Love”, “Twist and Shout”, “She Loves You”, “I Want to Hold Your Hand”, and “Please Please Me”. A week later on April 11th, the group held 14 positions on the that same chart, the highest number of concurrent charting singles by one artist ever. In the wake of this initial Beatlemania, came a flood of copycat artists known as the “British Invasion”. When 1964 began, Pete Townshend, John Entwistle, and Roger Daltry were in a mod group called The Detours, which played gigs at parties, small hotels, and social clubs. In the early part of the year a series of events took place in rapid succession which put in place one of the most dynamic acts in rock history. First, the group became aware of the group “Johnny Devlin and the Detours” and Townshend decided to float a bunch of “joke” names to see if his bandmates took to any. Daltrey chose “The Who” because he thought it had a “pop punch”. In April, the group had a chance encounter with a stand-in drummer for another band called Keith Moon. They were so immediately taken by his aggressive style that they immediately asked Moon to join The Who. Shortly afterward, Townshend was miming some machine gun theatrics when he accidentally broke the head of his guitar on the low ceiling of the stage. Angered by the laughter that ensued, he smashed the instrument on the stage before picking up another guitar and continuing to perform. Townshend would replicate this moment on stage for decades to come.

Following the frenzied popular success of their arrival in America, the Beatles returned to England and soon achieved an artistic success which rock and pop groups would attempt but fail to replicate for the next half century. A Hard Day’s Night eas a full length film, released on July 6, 1964, which starred the members of the group playing themselves within the frenzy of Beatlemania. A financial and critical success, the film has been ranked as one of the all-time greats of the 20th century. The full length soundtrack of the same name was released on July 10th and was the first Beatles’ album to contain all original music. This album also shows a marked leap in sophistication in the Beatles music with such classics as “Can’t Buy Me Love”, “Things We Said Today”, “And I Love Her”, “I Should Have Known Better”, “If I Fell”, and “I’ll Be Back”. John Lennon was the dominate songwriter on this album with George Harrison becoming the first to employ a new 12-string electric guitar which would be very influential to the later sound of the sixties. In July 1964, The Kinks were in IBC Studios in London when guitarist Dave Davies decided to slice the speaker cone of his guitar amp and poke it with a pin, making a natural distortion sound that came to define hard rock for decades to come. While Davies innovation is not disputed, the identity of the guitarist who played lead. Future Deep Purple organist Jon Lord claimed he was at the session and that then-session player Jimmy Page, later of The Yardbirds and Led Zeppelin, played the solo. The Kinks dispute this account and claim Davies handled the lead himself. No matter the case, there is no doubt that this single song, which wa later brought to new heights on Van Halen’s debut album, is one of the greatest single sources of influence in rock history.

While the Beatles completely dominated the pop world during the early part of the year, The Supremes achieved an unprecedented feat in late 1964 into early 1965. Five consecutive singles released by the Motown group – “Where Did Our Love Go”, “Baby Love”, “Come See About Me”, “Stop! In the Name of Love” and “Back in My Arms Again” – reached number one on the American pop charts. Group leader Eric Burdon first heard the traditional American song “House of the Rising Sun” when it was performed by folk singer Johnny Handle. He decided to arrangement in a way inspired by Bob Dylan, but with electric instrumentation. The result is a unique and indelible track by The Animals unlike anything else from the early sixties.

7. Eric Clapton and the Yardbirds

Eric Clapton joined the Yardbirds in late 1963 and left the band in early 1965 when he was dissatisfied with their new pop direction. In between was the calendar year 1964, when Clapton led the group to explore and advance the blues foundations which would be adopted by many groups over the coming decades, including several of Clapton’s own vast musical entities. The most remarkable thing about the Rolling Stones debut album may be just how unremarkable it really is. Recorded in early 1964, the album was self-titled in the UK, while the US version dubbed England’s Newest Hitmakers and was full of blues covers with only one Jagger-Richards original.

9. The Times They Are a-Changin’ Ever the prophet, Bob Dylan could not have more aptly named his third album, released right at the beginning of 1964. Like his later 1964 album, Another Side of Bob Dylan, Dylan performed all instruments and vocals on this album, which his first to feature only original compositions.