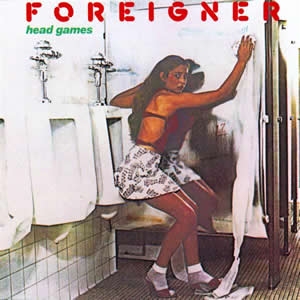 Head Games was the third studio album released by the rock band, Foreigner, in three years and continued their incredible success by reaching the Top 5 on the album charts and selling over five million copies. Produced by Roy Thomas Baker, the third producer employed in three album, Head Games has a grittier sound than its predecessors, with driving rock elements and sprinkles of synthesized embellishments. But what truly makes this album unique among Foreigner albums is the fact that the best material is not the popular radio tracks, but found within the mostly unheralded songs in the heart of the album.

Originally formed in 1976 by veteran musician Mick Jones and ex-King Crimson guitarist Ian McDonald, Foreigner got its name from the fact that half of the original sextet was British and half was American (therefore no matter where they performed, three band members were “foreigners”). After auditioning several singers, Jones brought on Lou Gramm, a little known singer from Rochester, New York. After rehearsing for six months, the group scored a recording contract before even playing their first gig and released their self-titled debut in early 1977. The album was a raving success, staying in the Top 20 for the better part of a year and spawning a world tour into 1978. Double Vision was released in the summer of 1978 sold even better than the debut.

Prior to the recording the album, bassist Rick Wills was brought on as the newest member of the band. Jones wrote or co-wrote most of the material which was all new and written in the studio over the course of a couple months in 1979. One track recorded but left off the original LP was “Zalia”, a collaboration among Jones, McDonald and Gramm, which was later included on a CD re-issue.

The pure rocker with unrelenting drive and slightly controversial lyrics “Dirty White Boy” opens the album as the hardest rocking song Foreigner had done to that point. Still, the track was accessible enough to reach the Top 20, peaking at #12 on the Pop charts. Jones stated the song was a veiled tribute to the late Elvis Presley, who had “changed the shape of music completely with the kind of heritage that he left”. “Love On the Telephone” revives the more traditional sound of Foreigner in the late seventies. Here Jones switches from guitar to his piano skills, holding down the rhythm with highly melodic vocals and multiple synths floating on top.

The wild, picked, single note riff introduces “Women”, a track with some Southern rock flavorings. The mostly classic rock arrangement (with some boogie piano added later) has no real verse/chorus structure, just a uni-directional drive with a few bridge sections. Gramm’s vocals are very reserved through the first verses but grows in intensity through the latter part of the song as Jones’ lyrics employ a repetitive word method;

Women that you write songs about, women who turn around and kick you out, women you dream about every night, women who stab you in the back with a switchblade knife…”

“I’ll Get Even with You” starts with a bright guitar riff with synth accents through the intro and into the melodic verses with simple hooks, while “Seventeen” is the first and only song on the album that is not top grade, as the melodies seem a little forced to fit a particular style. The title song has a sweeping, synth-driven approach which was ahead of the 1980s style it would help inspire. Compositionally, “Head Games” is catchy but, aside from the intro and identical bridge part, Gramm’s melody and vocals pretty much carry this track completely.

“The Modern Day” is pure new wave with very reserved vocals and otherwise good movement throughout. There are acoustic textures during the bridge, which seem to be added for pure fun and unique entertainment in this mid-tempo pop song. By contrast, “Blinded by Science” is dramatic and theatrical. Built with Jones’ minor-key piano chords beneath Gramm’s soaring vocals, this multi-part mini-suite returns to the opening hook between the various sections, which feature multiple synth textures and just the right enough of guitar riffing for effect.

As great a songwriter that is Mick Jones, the two finest overall songs on the album were written by Gramm and lesser known composers in the band. “Do What You Like” was co-written by McDonald and is the best unheralded song that Foreigner ever recorded. McDonald provides the core of this upbeat, acoustic folk number, accented by the bouncing bass lines of Wills and the steady beat with rolling drum fills by Dennis Elliot. Then comes all the extra sonic flavorings, Gramm’s strong but melancholy lead vocals, synth accents, a potent lead riff, and a plethora of background vocal choruses, which all combine to make this the best song on the album. This leaves “Rev On the Red Line” as the second best song on the album. Co-written by keyboardist Dennis Elliot, this closing track is a classic rock, car song about drag racing with dynamic vocals by Gramm and a great musical vibe throughout. Head Games continued Foreigner’s success which continued deep into the 1980s. However, not everyone was invited share the success, as Jones decided to remove co-founders McDonald and Greenwood from the lineup prior to the group’s next album 4. By paring back the group to a four piece, Jones was in firm control of all the music and compositions of future Foreigner material.