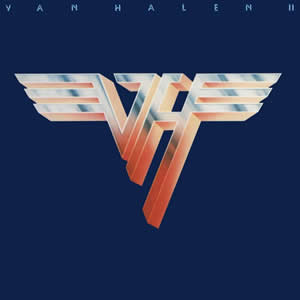 While rarely cited as one the group’s best works, Van Halen II, features some of the band’s best individual tracks and may well showcase Van Halen at its cohesive best. Where their 1978 debut album was a fantastic showcase for guitarist Eddie Van Halen, this 1979 follow-up finds the rest of the band bringing it up near his level to give the album a greater sense of parity. Produced by Ted Templeman, this album is much more than just a carbon copy of the debut. It may have been the best example of a group successfully following up on a brilliant debut album since Led Zeppelin did it with Led Zeppelin II a decade earlier.

Following the tremendous success of their debut, Van Halen embarked on a world tour through much of 1978 before returning to California in December to immediately begin work on this second album. Warner Brothers decided to give the group a smaller recording budget, in spite of the first album’s phenomenal success. Because of this, there was very little studio time allotted to get the recordings done and many of the recordings were first takes. Further, with little time to compose new material, they drew some material from the demo tracks they recorded prior to the first album.

The entire recording process was completed in three weeks, and this frenzied pace spawned some sonic innovation. Templeman reverted back to some of his pop sensibilities from earlier in the seventies. Eddie Van Halen achieved a thick guitar sound by overloading the circuits on his amplifier, while bassist Michael Anthony used a smaller than normal bass amp to get a sharper, less rounded sound.

“You’re No Good” is, frankly, an odd cover selection to start off Van Halen II. However, in reviewing the album as it is laid out in total, it seems to be that this bit of static electric spark starts the chain reaction that leads to the musical inferno portrayed toward the end of the album. Starting with the doomy, slow meandering of Anthony’s flanged out bass before the song slowly marches in. The song proper has all of the Van Halen elements prevalent on the first album and, while certainly not the finest on the album, “You’re No Good” builds enough to make the listener feel like it is cut too short at the end. The mood brightens with the pop rock of “Dance the Night Away”, the group’s first Top 20 hit. The melodic vocals of David Lee Roth accompanies the catchy guitar riff with the bouncy bass perfectly locked with the bright kick drum of Alex Van Halen. There is a higher pitched counter-riff during the chorus and a simple yet brilliant bridge riff variation, while the outro is also done well with Roth inverting his lead vocals with the backing chorus.

Next come a couple of classic barroom songs. A short intro leads into the heavy riff which launches “Somebody Get Me a Doctor”, which dates back to the years before the first album’s release. “Bottoms Up!” has a moderate, unplugged intro by Eddie Van Halen before it breaks into an upbeat quasi-rockabilly song with Anthony slightly outshining the Van Halen brothers musically, as Eddie’s short leads fall just short of the historic precedent he set on the first album. The first side closes with “Outta Love Again”, the oldest composition on the album, notably interesting for its wild, space-like drone intro and clever use of rudiments and vocal timings. Overall, this is probably one of the strongest tracks for drummer Alex Van Halen with his shuffle rhythm through the verses and use of a variety of roll techniques elsewhere. The second side is where the true genius of Van Halen II lies, with every track being interesting, original, and entertaining. The multi- sectioned “Light Up the Sky” is amazing for how much is packed into this barely three minute long song. Pure hard rock verses with Roth’s precise and complex lead vocals moving through the various sections. During the scaled-back bridge section Roth performs a raspy falsetto before Eddie ignites into a blistering lead guitar, before Alex takes his turn with a short drum solo and then an interesting outro with backwards-masked harmonies leading into the closing hook. The acoustic instrumental “Spanish Fly” is brilliant just in how unlike anything else it is. Sounding almost intentionally non-professional, this is a close up trek into Eddie Van Halen’s genius stripped down to a nylon-stringed guitar and one single minute. In sharp contrast, “D.O.A.” is the heaviest rocking song with an absolutely brutal grind by Eddie Van Halen and the pure rock action of everyone else. Roth’s verse vocals are rather reserved but contrasted later with screams to match the song’s intensity. The later guitar lead is brilliant with an excellent complimentary bass underneath.

“Women in Love…” starts with a bell-like intro solo by Eddie which is pure melody and harmonic technique. The body of this steady song is a quasi-ballad with lyrics apparently about groupies and is the best song vocally on the album. Every note is pure sonic bliss right down to Roth’s word “scream” tailed with a slight inflection of an actual scream. The verses mix a somber riff with the harmonized vocals above a thumping bass and drum rhythm, while the guitar assentation mixes with the harmonies during the chorus. The album ends with the entertaining pop/rock song “Beautiful Girls”, which contains chanting vocals with some slightly clever rhyming before the song builds in crescendo excitement through the entertaining outro.

Van Halen II peaked at number six on the American album charts and has sold nearly six million copies since its release. Over the next two years the band released a couple more albums, Women and Children First and Fair Warning, which closely followed the same formula as this record and continued the band’s popularity.

One thought on “Van Halen II”