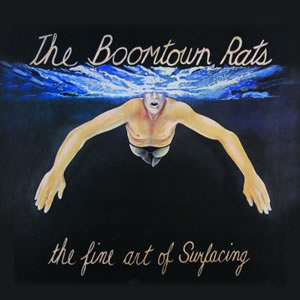 Buy The Fine Art of Surfacing The Boomtown Rats third album, The Fine Art of Surfacing, was the commercial apex of the band’s short career. Musically, the group branched out from their punk rock roots towards many styles in the new wave realm. Lyrically, the music was influenced by group leader Bob Geldof‘s travels in the United States prior to the album’s production. Still, this album by the Irish group did much better in the UK, where it broke into the Top 10, than it did in the US, where it failed to reach the Top 100 on the album charts.

The group got its name from a gang of children in Woody Guthrie’s autobiography, Bound for Glory and were signed by Ensign Records shortly after relocating to London in 1976. A Top 40 hit, “Lookin’ After No. 1” predated the band’s self-titled 1977 debut album. The Boomtown Rats follow-up album, 1978’s A Tonic For the Troops, was an even greater success, spawning three more hit singles including the number one hit “Rat Trap”.

Produced by Robert John “Mutt” Lange and Phil Wainman, The Fine Art of Surfacing was recorded in Holland in late 1978. Beyond the album’s ten tracks, there were two short hidden tracks and three more B-sides recorded during the sessions. While the album’s themes are serious, there is a lighter and somewhat humorous approach to the songwriting, giving the overall vibe an entertaining depth.

A calm strummed acoustic and sustained organ introduces the album opener “Someone’s Looking at You” before the song breaks in with a solid, rock arrangement. This track has a theatrical Kinks-style influence and the song reached number 4 on the UK Singles Chart in early 1980. Another pop single, “Diamond Smiles” comes close to being a decent new wave pop rock song but it does lack a bit on the melodic side. A highlight from this track is the great outro which contains some orchestral elements.
“Wind Chill Factor (Minus Zero)” is led by the piano of Johnnie Fingers and is filled with great little musical and effect motifs, melodic vocals, strong guitars, and just enough synth effects to make it a very interesting track.

The odd but entertaining “Having My Picture Taken” was co-written by bassist Pete Briquette and is filled with reggae elements. Fingers employs several overdubbed piano and keyboard sections, while Gerry Cott adds a potent rock guitar lead later on the track. Geldof wrote most of the material on The Fine Art of Surfacing with the exception of “Sleep (Fingers’ Lullaby)”, written (of course) by Johnnie Fingers. The first side wraps with this fine rocker of an insomniac song in the same vein as John Lennon’s “I’m So Tired”. While the lyrics trend a bit towards the frivolous, the musical drive, blended vocals, and great production make this a track an interesting listen.

The Boomtown Rats signature song shows some amazing restraint in its simple arrangement of Fingers’s piano along with just lead and backing vocals. The track, which became the band’s second number one single, was based on the real life shooting spree where a teenage girl fired into a school playground in San Diego, CA, in early 1979, killing two adults and injuring nine others. When asked about her motivation for the shootings, the girl simply replied “I Don’t Like Mondays”. The song was composed less than a month after the incident but Geldof worked hard to obscure the true meaning of the song.

“Nothing Happened Today” is an ironic title of an upbeat rocker which is a sort of an “ode to boredom”. The song contains many electronic effects to build the backing riffs to this mainly vocal-driven tune and breaks into a sort of electric jug band section during the bridge. Co-written by Cott, “Keep It Up” is fun, upbeat, and made of pure pop fluff, led by some nice synth leads while it tries hard to find catchy riffs and hooks. “Nice N Neat” is probably the only track on the album that even hints at the band’s punk roots, albeit a more polished version of punk. There is a brief drum solo section by Simon Crowe and a nice blend of rhythm and lead guitars by Cott and Garry Roberts. “When the Night Comes” blends nice acoustic guitars with synths in the intro and the music is great throughout with a blended sound somewhere between that of classic Springsteen and Thin Lizzy. There is a wild bass line by Briquette up front during the vocals and this complete jam of a song leaves the listener wanting for more as the album concludes.

The success of The Fine Art of Surfacing did not lead to purely harmonious days for the group, as Cott departed from the band in early 1980. The Boomtown Rats put out a handful of quality albums through the early-to-mid eighties before Geldof’s founding of Band Aid and Live Aid brought their profile up again.