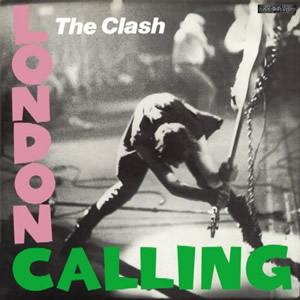 The Clash advanced light years with their third release London Calling. This 1979 double album explored many sub-genres and showed with no doubt that this band was the most advanced of the punk groups to come out of London in the mid seventies. Through extensive touring and exposure to groups of differing genres, The Clash developed a blend of thoughtful music to combine with their core punk principles, forming a new genre standard which would come to be know as “post punk”. Thematically, the album contains songs that point a critical eye towards the contemporary world, with much of the background and characters based in London. While these themes work well together to make the album cohesive, they don’t form the type of narrative arc which would elevate London Calling into a “concept” album. The album’s front cover borrowed it style heavily from Elvis Presley’s self-titled 1956 debut album. The Clash’s versions features a black-and-white photograph of Simonon smashing his bass against the stage at a gig in New York City in September 1979. Many retrospective publications have listed this album cover as one of the top ever and was selected by the British government as one of ten “Classic Album Covers” to be used on Royal Mail postage stamps in 2010.

By the time The Clash was conceived in 1976, veteran London-based guitarist and vocalist John Graham Mellor had permanently adopted his stage name of Joe Strummer. The group was formed when Stummer joined up with two members of the group London SS, guitarist Mick Jones and bassist Paul Simonon, in order to form a “band that would rival the Sex Pistols”. Just six months after their first live performance, The Clash signed to CBS Records and began working on their debut album, which would be released only in the UK originally. Through these earliest days, the band worked with several drummers (over 200 by Strummer’s count). Finally, Topper Headon came along and the band finally had a permanent drummer. At the request of CBS, the group recorded a more standard, “cleaner”, less spontaneous album with Give ‘Em Enough Rope in 1978. This second album was a tremendous success in the UK but not quite the American breakthrough CBS had hoped.

After recording their second studio album, the band separated from their manager and needed to find another location to compose their music. The band began to work on their third album during the summer of 1979 at a rehearsal space called Vanilla Studios, which was located in the back of a garage. The Clash found a successful formula with Jones composing and arranging the music and Strummer writing the lyrics. By the end of the summer, the band entered Wessex Studios to begin recording London Calling with producer Guy Stevens, who used unconventional methods and fostered a very relaxed atmosphere for the band members. CBS initially denied the double album release, but instead gave permission for the band to include a free 12-inch single (which essentially made it a double album anyway).

The first of four sides begins “London Calling”, the title song which was originally the most popular track on the album. Musically, the song contains choppy guitars and bass throughout contrasted by the ever-steady drum beat by Headon. Composed by Strummer and Jones, the title was taken from the BBC World Service‘s station identification during World War II and the lyrics concern modern day issues. “Brand New Cadillac” is an updated version of a rock classic original composed in the 1950s by Vince Taylor. The first of three cover songs on London Calling, this recording features distant and spatial sound, giving it a bit of a surreal feel to the otherwise standard roots rocker.

The first of several genre diverse tracks, “Jimmy Jazz” starts with heavily flanged guitar riff that tops off the standard jazz vibe with acoustic guitar, shuffling drums, and an impressive bass pattern by Simonon. This is also the first of plenty of tracks with brass sections and leads by the session group collectively known as the The Irish Horns. “Hateful” is an odd but interesting little track with nice rock grooves, call and response vocals, and differing sub-arrangements throughout the track. Closing out the first side, “Rudie Can’t Fail” is pure rock/reggae, in many ways similar to the previous song, but the weakest overall on the side.

A new wave track with driving and melodic bass over quicky strummed acoustic by Jones and chanting and unrelenting vocals by Strummer starts the second side. Written the Basque terrorist bombings in Spain, “Spanish Bombs” compares this modern day experience with the Spanish Civil War. “The Right Profile” is a choppy, upbeat funk built on bouncy bass riff by Simonon and great brass accents and later saxophone solo by The Irish Horns, making it the best song thus far on the album. “Lost In the Supermarket” features Jones on lead vocals and is built on a great rhythm, which is almost disco with an adult contemporary style vocals and musical melodies. Written about an actual market on the World’s End Estate in London, Strummer wrote this song for Jones when imagining his childhood growing up in a basement with his mother and grandmother, with the cool lyric; “I wasn’t born so much as I fell out…”

“Clampdown” has the initial feel of a punk epic at first but later morphs into a bit-driven canvas for vocal phrases by Strummer, who cites many situations and locations (including our own hometown of Harrisburg, PA). This track originally began as an instrumental track called “Working and Waiting” but the Strummer decided to add the rapid-fire lyrics about fighting the status quo. “The Guns of Brixton” was a rare Clash track written by bassist Paul Simonon, who grew up in the Brixton section of London. Simonon also contributes lead vocals to this pure reggae track with some topical sound effects on the guitars and great bass and drums throughout.

The original third side of London Calling may be the strongest overall musically, despite the fact that it begins with the unfocused “Wrong ‘Em Boyo”, which starts with a short rendition of the Country/Americana standard “Stagger Lee”. “Death or Glory” returns to standard hard rock with cynical lyrics, a great musical arrangement and performances by the entire band. Written in part as the stereotypical punk fascination of trashing the previous generation of rockers, the song ironically has sweet but strong vocal harmonies and very satisfying chord progressions. “Koka Kola” is the closest to a traditional punk track on the entire album (at least vocally), although musically it is a bit too polished to be a true punk song, as the bass leads the song much more than the guitars. Jones’s “The Card Cheat” is a piano-dominated track, almost in the Billy Joel domain musically (albeit there is a whole different story lyrically). The band executes another excellent and entertaining musical performance, with expert mixture of horns, and rock instruments in production. The album’s final side commences with “Lover’s Rock”, a song which sounds most like a late seventies pop song, although it is a bit risqué lyrically with strong sexual overtones. There is a cool flanged guitar and harmonized vocals up top during the song proper while the long outro takes it all in a bit of a different direction. “Lover’s Rock” advocates safe sex and planning. “Four Horsemen” is more straightforward musically than the previous track as an upbeat rocker built more for lyrical themes by Strummer, while Jones’s, “I’m Not Down”, is primarily a funky track with some rock and disco elements.

The cover of Danny Ray and the Revolutionaries track, “Revolution Rock”, is a fun and entertaining group reggae jam, accented by Strummer’s varying vocal screeds and strained vocals. All in all very interesting, especially the top-notch rhythms by Simonon and Headon, a bouncy organ by session man Mickey Gallagher, and more strong brass presence by The Irish Horns. The double album wraps up with “Train in Vain”, which by today’s standards would be considered a “hidden track” because it was not listed on the original album sleeve. However, this was due more to late decision making on the song rather than a concerted effort to provide an “Easter Egg”. In any case, this track written and sung by Jones would go on to become the most popular track on the album due to its disco-like beat, funky riffs, and loose but melodic vocal lines.

London Calling was originally much more popular in the UK, where it reached the Top 10, than it was in the US. However, the album would eventually sell tenfold the copies in America, where it went platinum and remains a much heralded release in rock history. The Clash followed up with an even more ambitious triple-album release of Sandinista! in late 1980, followed by the fine Combat Rock in 1982, before the band unfortunately imploded in the mid eighties, making these sparse releases ever the more valuable.