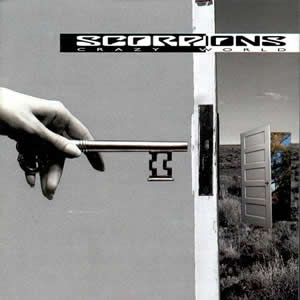 Driven by the popularity of a historically significant song, Crazy World was a commercial success in 1990 for Scorpions. The eleventh overall studio release by this rock band from Germany, the album charted high in the US and is the group’s highest selling album all time in the UK. Formed a quarter century earlier, this record also ushered in a fourth decade of production for Scorpions and showed that they still had plenty of creativity and rock originality in contemporary times.

Following the tremendous success of 1984’s Love at First Sting, the band toured the world and spawned the popular live album, World Wide Live in 1985. Now at the height of their popularity, the group decided to take some time off before recording another studio album. Four years in the making, Savage Amusement was released in 1988 sporting a more polished and mature sound that was met with some disappointment by long time fans.

In an effort to distance themselves from the sound on that latter album, Scorpions decided not to us their long-time producer Dieter Dierks, who had worked with the band on every previous album dating back to the mid 1970s. The group brought in studio veteran Keith Olsen, who worked to bring back the band’s raw, classic sound. The band also enlisted the help of studio composer Jim Vallance, who contributed to several of the album’s tracks.

Starting off the album, “Tease Me Please Me” is a pure eighties-style rocker with good, deep riffing and majestic vocals by lead singer Klaus Meine. The song’s chorus has a catchy hook with rudiment accents. The second track, “Don’t Believe Her”, follows in much the same vein as the opener. In fact, this song is so similar it could be the second part of a multi-part suite (which it is not), using the same composers and the same vibe. “To Be with You in Heaven” starts with simple drum beat by
Herman Rarebell along with swelling guitar feedback before the two instruments join forces in unison. Moderate and methodical throughout, the song contains same philosophical and romantic lyrics with the hook;

To be with you in heaven I would go through the darkest hell, In heaven there’s no cure for love that kills…”

“Wind of Change” was written solely by Meine and is the true classic from this album (not to mention one of the all-time rock classics). The signature whistling intro is accompanied by a perfect blend of one acoustic guitar and two electric guitars by Matthias Jabs and Rudolf Schenker. The group’s most genuine track, the lyrics come in the wake of the fall of the Berlin Wall and forecast a similar change in Russia (which actually happened the following year, just as the song was peaking). “Wind of Change” holds the record for the best-selling single by a German artist, topping the charts in seven nations across the globe (including Germany) and reached the Top 5 in both the US and UK.

Obviously following this high point, the album never gets any better. But there still are some interesting moments. “Restless Nights” contains a methodical blues crunch with interesting and melodic verses. Here bassist Francis Buchholz has a few moments to shine through and Meine gets to show off his vocal range. Crazy World was the last album to feature Buchholz, a veteran from the band’s classic lineup.

The album’s original second side starts with a couple of standard hard rock tracks. the rather mundane theme of “Lust or Love” is followed by “Kicks After Six”, which contains some sonically desirable riffs. “Hit Between the Eyes” follows with some nice fire-one style rudiments and a hyper arrangement throughout, including a cool duo guitar lead by Jabs and Schenker.

Coming down the stretch, we have the steady rocker “Money and Fame”, featuring a cool talk box effect by Jabs, who co-wrote the track with Rarebell. The title track, “Crazy World” has interesting chord progressions and a deep and smooth harmony during the chorus hook. However, at five minutes long, this track is stretched out a bit too long. Vallance plays some moody keyboards along with Schenker’s picked acoustic on “Send Me an Angel”, a ballad which is at once melancholy and hopeful. The true highlight of this closer is Meine’s vocal which shine through with another indelible hook to complete the album.

Just prior to the release of Crazy World, the group fittingly launched the all-star concert The Wall Live In Berlin, performing both versions of Pink Floyd’s “In the Flesh”. Following the album’s release, Scorpions launched their own world tour with further success.