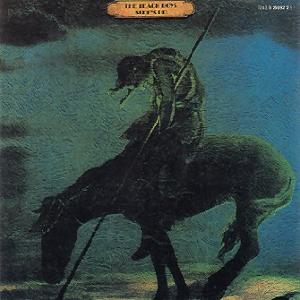 1971 was an exceptionally great year for rock n roll, and we at Classic Rock Review regret that we can not give a proper review to all the great works from that year in the short time we allotted ourselves. However, there is one that we felt we had to “squeeze in” before we’re done, due to it being probably the most unique and unusual album of that year – Surf’s Up by The Beach Boys. This 17th overall album by the group was also sort of a commercial comeback as it reached the Top 30 on both sides of the Atlantic.

To be honest, this album can be very frustrating. It is a mish-mash that, on the one hand, offers deep, rewarding, quality compositions worthy of the talent in this band. But on the other hand, there are some tacky, directed “social commentary” songs that, in many cases, barely rise to the level of musical Public Service Announcements. However, the album does possess a cohesive mood and tone and it does get more consistent and stronger as it goes along. So, in the end, we decided that the good here outweighs the bad and that the album needed to be reviewed.

Some has stated that Surf’s Up defined the band’s tumultuous career better than any other album, and this very well may well be the case. The Beach Boys rode to fame on selling good times, fast cars, surfing, and girls. In the process, the squeezed every bit of the “endless fun” out of California and over-used the term “surf” (which, including this album and title song, is used in some form in the titles of four different albums and eleven different songs). In the end, this was all a nice fantasy, but eventually you have to grow up and face the realities of life.

The band’s primary songwriter and musical driving force, Brian Wilson, retired from performing live by 1965 due to psychological and anxiety issues. He instead concentrated on studio production for the band. In 1966 he produced the brilliant Pet Sounds, a great departure from the band’s early work that was universally acclaimed.

Later that year, Wilson brought in Van Dyke Parks to collaborate on a follow-up album titled SMiLE, but due to growing artistic turmoil within the band, Brian’s deteriorating mental state, and a prolonged production problem, Parks abandoned the project in 1967 and the album was never released.

A key song from those sessions called “Surf’s Up” was performed live on piano by Brian Wilson for a CBS News special on “modern” music, which caused much curiosity and speculation by fans and critics about the unreleased “SMiLE” material over the next several years. During this time (1967-1970), The Beach Boys released several more albums, but each decreased in popularity, signaling a rapid decline for the band.

Then in 1971, Jack Reiley was brought in as manager, and he master-minded this new album. It was to be built around the (now mythical) song “Surf’s Up”, along with other abandoned out-takes from previous projects and new, politically-orientated songs. Reiley would also co-write a couple of fine songs with Carl Wilson and even performed the lead vocals on the psychedelic Parks/Brian Wilson song “A Day in the Life of a Tree”, after everyone in the band refused to sing it.

The youngest of the three brothers in the band, Carl Wilson had never previously written anything of significance for The Beach Boys, but his co-written contributions of “Long Promised Road” and “Feel Flows” are two the best songs on this album. Further, with Brian all but absent from the (1971) production of this album, Carl stepped up and assumed many of the producer responsibilities, although production credit was ultimately given to simply “The Beach Boys”.

The album’s sound is further diversified by the large number of other songwriting contributors. Al Jardine wrote some of the new “politically conscious” songs, including the opener “Don’t Go Near the Water”, an ironic message from a band that had been advocating the exact opposite for many years. Mike Love reworked a live standard into “Student Demonstration Time” and, although not quite yet an “official” member of the band, Bruce Johnston wrote and sang lead another on the album’s finer songs, the nostalgiac “Disney Girls (1957)” (Johnston was a long time “stand-in” for Brian Wilson on stage).

However, even though his actual participation was minimal, Brian Wilson managed to contribute the album’s two most significant songs, the two that close out Surf’s Up.

First, there was the newly-penned “Til I Die”, a beautiful but haunting ode to helplessness, which contains the tradition “Beach Boys sound” built around the rich harmonies of Carl, Brian, and Mike Love.

Then, of course, there is the climatic title song written five years earlier. A mini-suite in three distinct parts fused together seamlessly. The original, Brian Wilson produced backing track provides a backdrop for new vocals by Carl during the first part, while Brian’s original vocals are used in the middle part. The song’s concluding section was based on another SMiLE-era track, “Children Are the Father of Man”, and features Jardine on lead vocals and Carl and Brian doing harmonies. As a whole, even though the song distinctly changes and the lyrics are a bit thick, the message is undeniable.

Through the rest of the 1970s and well into the 1980s, Brian Wilson virtually dropped out of the music scene while the rest of the band would tour and play some of their greatest hits from the early 60s in what would become known as the “Endless Summer”. Surf’s Up proved to be their last, best effort as, artistically, the Beach Boys would not quite reach this level again.