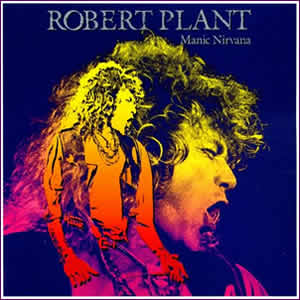 If Led Zeppelin had attempted to make a pop-oriented album, it may have sounded like Manic Nirvana. This 1990 release by Robert Plant fuses some of the pop and dance-oriented elements of his earlier solo efforts released in the 1980s with a retro vocal and guitar approach reminiscent of the classic rock band that Plant fronted for a dozen years. This approach usually works, in some places spot on, in others less so. But, in total, it all makes for an interesting listen.

Around 1990, there was a resurgence of Led Zeppelin in the musical scene, and there is little doubt that this played a part in the approach of Manic Nirvana. In May 1988, Plant and former bandmates Jimmy Page and John Paul Jones joined Jason Bonham (son of original drummer John Bonham) for the first official Led Zeppelin show in nearly a decade. Page also showed up for a cameo at a few of Plant’s concerts and Plant provided vocals for one song on Page’s solo album, Outrider. Later in 1990, the 54-track Led Zeppelin Box Set was released as the first ever compilation of any kind by the group and it included several tracks which had never before been released.

Manic Nirvana was the second of a trio of albums that Plant worked on with keyboardist/guitarist Phil Johnstone, following the commercial success of Now and Zen, released in 1988. Johnstone also co-produced the album with Plant and Mark Stent, and the trio came up with sonic qualities on this record which were unlike those on other albums. The sessions for this album produced a few tracks which would not be released until Plant’s 2006 box set, Nine Lives, including the standout, “One Love”, which has fifties-like undertones with cool slide guitars and horn-like accents.

The opening track, “Hurting Kind (I’ve Got My Eyes on You)”, starts with a sweeping flange similar to that on “Nobody’s Fault But Mine” from Led Zeppelin’s Presence. This is soon interrupted by a steady thumping beat as Plant unleashes a few wails similar to (but less effective than) those of his heyday. Released as a single, this song reached #1 on the Billboard Mainstream Rock chart. “Big Love” is driven by the steady, methodical groove of drummer Chris Blackwell and is carried by Plant’s excited vocals. The bridge section includes a raw guitar lead sandwiched betwwen sections with complex background vocal patterns. “S S S & Q” allegedly means ”soak, shake, splash, and quake” and has a long lead intro of the bluesiest rock guitars on the album. This gives way to more controlled riffing above sterile and modern rhythm, giving the heart of this song a dance-track feel, especially during the synth and quasi-rap bridge with just a touch of James Brown-like textures.

Johnstone’s picked acoustic fades in on “I Cried” accompanied by some rounded bass notes by Charlie Jones. Starting with the main chorus, Plant provides majestic vocals on this excellent song that eventually builds with electric textures and dynamic sections. The outro fades with subtle acoustic textures, closing this smooth and introspective song. Orchestral strings commence “She Said”, soon cut by strong rock riffs and beats. However, this song, which starts interesting, does get a bit long in the tooth through its five minute duration. “Nirvana” is co-written by Jones and starts with an almost punk riff before breaking in with a steady beat and bass. This track tries to reach for the mystical, especially with the droning guitar lead which has a slight tinge of Indian flavor and the twin pauses for Plant to deliberately recite the song’s title. the track ends with a weird effect, like a backwards-masked, out of tune piano.

“Tie Dye on the Highway” starts off with actual sound from Woodstock before breaking into a dance beat with droning instrumentation and a pleasant vocal melody by Plant, which reflects his style from some earlier solo albums. Plant even supplies a slight harmonica lead adding further variety to make this one of the standouts on the album. The only cover on the album, “Your Ma Said You Cried in Your Sleep Last Night”, contains an actual record scratch from the sampled kick drum of the 1961 original by Kenny Dino. The strong beat gives Plant’s vocals plenty of room to soar in this chanting rap with fine backing vocals as well. Released as the second single from the album, the song reached #8 on the Billboard Mainstream Rock chart.

The cheesy synth intro of “Anniversary” disrupts the cool groove from the previous track. This song never really goes anywhere, just adding certain instrumentation such as the off-beat drums and cool bluesy guitar lead. Guitarist Doug Boyle co-wrote “Liars Dance”, a folksy acoustic with Boyle’s picked notes falling between, and sometimes mimicking, Plant’s vocal lines. The track stays purely between the blues acoustic and lead vocals, making it a quality track late in the album. “Watching You” employs one more shot at the frenzied production. However, the drums have more reverberation than is necessary for effect, causing the vocals and strumming acoustic to be a bit buried in the mix. Still, with a hypnotic effect, this song acts as a very potent closer as Plant’s excited vocals are excellent in the background.

Plant and Johnstone followed up Manic Nirvana with 1993’s Fate of Nations before Plant reunited with Page in 1994 to perform and compose new music.