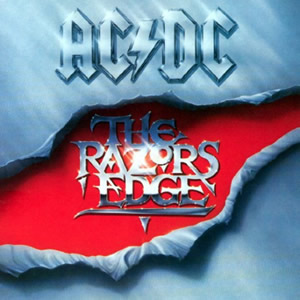 AC/DC showed the world that they were still an energetic and formidable band as they commenced the 1990s with the successful album, The Razor’s Edge. The music is upbeat and strong throughout this record and all tracks were compose by brother guitarists Malcolm Young and Angus Young. The album helped the group regain its former glory and sold approximately ten to twelve million copies worldwide, putting it well within the top echelon in AC/DC’s collection of albums.

Following the tremendous success of 1980’s Back In Black, AC/DC had mixed levels of success through the 1980s. The group’s original drummer, Phil Rudd, was fired following a physical altercation with Malcolm Young in 1983 and session drummers were used for that year’s album, Flick of the Switch. The group’s next album, Fly on the Wall in 1985, was universally panned as one of the group’s worst. However, 1988’s Blow Up Your Video, which reunited AC/DC’s original producers, Harry Vanda and George Young, and was a commercial success.

The Razor’s Edge was produced by Bruce Fairbairn and is the the only studio album by the band to feature drummer Chris Slade. The Young brothers took on composing duties alone because vocalist Brian Johnson was unable to attend some of the early album sessions.

With a long, building and catchy intro, “Thunderstruck” is the perfect opening track for The Razor’s Edge. The track is built on Angus Young’s fingerboard progression, which acts as an arpeggio that leads the rhythm for the entire track. The song peaked at #5 on the Billboard Mainstream Rock chart and remains a staple in the band’s repertoire. “Fire Your Guns” continues the feel as a rapid and spastic rocker with steady rhythms by Slade and bassist Cliff Williams, along with nervous riffs and desperate hooks.

The album’s second big hit, “Moneytalks” is another track built on a simple but rich riff and a catchy shout-along. Johnson’s vocals hit a sweet spot somewhere between a crier’s shout and an alley cat’s yowl with satirical lyrics about the economic ways of the world. The title track, “The Razors Edge”, starts with droning solo by Angus Young and eventually builds on the drum accents by Slade into a moderate and dark rocker. This song has more musical variety than preceding tracks but still sticks to a simple, anthemic theme lyrically. The farcical “Mistress for Christmas” is a bit of racy fun with Christmas tunes, while “Rock Your Heart Out” features a cool bass line by Williams. “Are You Ready” was another minor hit, reaching #16 on the Mainstream Rock chart with its building riff and strategic launch.

The album’s second half contains lesser known (and somewhat forgettable), tracks, starting with “Got You by the Balls”, a less tactful rendition in the line of the brilliant “Big Balls” from 1976’s Dirty Deeds Done Dirt Cheap. “Shot of Love” continues as another generic AC/DC track, followed by the slightly better “Let’s Make It”, with a nice riff by Malcolm Young. “Goodbye & Good Riddance to Bad Luck” has an interesting title above anything else, while the closer “If You Dare” finds a nice groove to end the album on a high note.

The Razor’s Edge reached #2 in the US and #4 in the UK, a level of commercial success that matched that of AC/DC’s glory years of the late seventies and early eighties. Following its release, the group embarked on a highly publicized world tour which spawned material for the group’s 1992 live album and sustained their popularity for years to come.