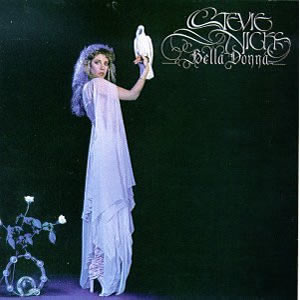 After three albums with Fleetwood Mac, Stevie Nicks was doubtlessly the most recognizable figure in that popular and talented band. However, her actual participation as far as songwriting and lead vocals had never eclipsed 50% on any of those albums. So prior to her debut solo effort in 1981, there was uncertainty about how a full album of her music would pan out. One serious listen to Bella Donna would set all doubt aside. This debut solo album went on to achieve critical and commercial success, topping the U.S. album charts and spawning four Top 40 hit singles, while reaching the Top 20 in six other nations.

The album contains ten songs composed by Nicks on piano over several years while on tour with Fleetwood Mac in the late seventies. These songs were then enhanced by producer Jimmy Iovine and a posse of talent, ranging from headline acts like Tom Petty & the Heartbreakers and Don Henley, formerly of The Eagles, to top-notch session musicians such as Donald “Duck” Dunn from the famed Muscle Shoals studio in Alabama. The result is an interesting and pleasant listen which contains some timeless works that flirt with pop, country, and folk while remaining distinctive and original.

…and we fight for the northern star”

While Bella Donna‘s opening title song is definitely Fleetwood Mac-esque in it’s calm approach and long sustained guitar drones, it also contains a more ceremonious or ritualistic feel, like some kind of mass, as it vacillates between beatless sound scape and rhythmic drive. It is followed by “Kind of Woman”, another very calm, almost melancholy song, with a waltz-like beat an excellent guitar lead.

The album then abruptly takes a radical turn with “Stop Draggin’ My Heart Around”, one of two songs by Tom Petty & the Heartbreakers on the album, along with the entertaining “Outside the Rain” on the second side. That band didn’t use these songs for themselves (and their current album, Hard Promises really could’ve used these), and the resultant Nicks-led recordings add a completely new dimension to Bella Donna.

“Leather and Lace” is a true duet with Henley, resulting in a moody and romantic ballad which has a sparse acoustic arrangement that really showcases the vocal talents of both. On the other end of the pop spectrum, “Edge of Seventeen” offered a rhythmic dance beat with a near rap in between the oft-repeated chorus about the “white winged dove”. Rumor has it that the title was coined by Tom Petty’s wife, who replied “age of seventeen” when asked by Nicks how old they were when they first met. But Stevie mis-heard this as “edge of seventeen” and was instantly taken by the concept.

Perhaps the most enjoyable song on the album, “After the Glitter Fades” is a pure country song, reminiscent to some of Olivia Newton John’s early stuff, with dynamic vocals nicely complimenting to rich arrangement, which contains virtuoso piano by Roy Bittan and masterful pedal steel by Dan Dugmore.

Stevie Nicks would continue on with Fleetwood Mac as well as produce more solo albums with much success in both throughout the rest of the 1980s and well into the 1990s. But artistically, she would not again reach the heights of Bella Donna in either side of her musical career.