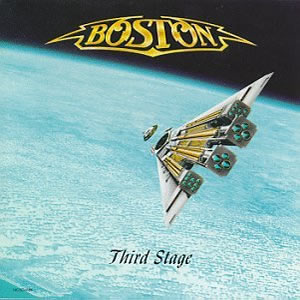 Tom Scholz is a figure unlike any other in the history of rock n roll. A natural inventor, Scholz studied at M.I.T. as a mechanical engineer. After graduating, he worked at Polaroid, where he learned the basics of audio engineering and began experimenting with his own sounds. Starting in 1969, he recorded and re-recorded the music that would comprise the debut album Boston, a masterpiece that was finally released in 1976 (Classic Rock Review will look at that album in December). After the phenomenal success of their debut, the band produced the follow-up Don’t Look Back in the relatively short time of just two years. Released in 1978, Scholz never felt like it was quite “done” and swore that he’d not rush out another album. It would be eight solid years before the next album, Third Stage would see the light of day.

This wasn’t intended to take so long. In fact, the first side was written and recorded between 1980 and 1982, but technical difficulties and an eventual lawsuit by the record company CBS slowed the whole process down. To Scholz, the successful completion of this third album turned into an obsession. He claimed to have pushed the record button over 1 million times and filled over 100 reels of tape with music. He decided to use separate 24-track tapes for music and vocals and synchronize via a new digital machine. But it turned out that the high tech machine “was a lemon” and so an engineer was hired to “use his thumbs” to keep each machine running in sync. Further, Sholz refused to use any orchestral instruments, synthesizers or MIDI synchronization on Third Stage – making his job as producer infinitely harder in the process, but preserving the sound’s integrity. The only deviation from the sound of the 1970s albums, was his own invention The Rockman, which he developed over the long course of this project and which would prove to be a much more lucrative product than the album ever was.

Once the CBS lawsuit was settled in Scholz’s favor, he was free to sign with MCA and release Third Stage in late 1986. It would go to become the most successful album commercially and spawn the band’s only #1 hit.

Although portrayed as a band, Boston was more like a duo with Scholz providing on the music, production, and performing most of the instrumentation and Brad Delp doing all the lead and harmonized vocals. The result is musically excellent but a bit weak lyrically. There is also a bit of disparity between the album’s earliest tracks on side one and the more recent material on side two, especially when it comes to Delp’s vocals.

“Amanda” was the very earliest song written for the project in 1980. A sweet and beautiful love song, with excellent, harmonized guitars, the song immediately reminded fans of the immense talent of Boston and, in turn, it became the band’s first and only #1 hit. “We’re Ready” follows as a nice compliment to “Amanda”, with it’s moderate, deliberate riff and beat, that does pick up at parts, but always manages to come back to earth and ease into the mood of the song.

The band then “launch’s” into the experimental and very majestic intro to “Cool the Engines”, in keeping with the their tradition of intro pieces. The song itself is musically superb with many areas of creative stop-and-start throughout. The lyrics do have a tinge of preachiness that may be a bridge too far for casual fans.

This brings us to perhaps the downside of “Third Stage”, the concept itself. Apparently coined by Scholz, the “third stage” is supposed to be that age of enlightenment beyond childhood and adulthood. It is portrayed most vividly in the song “My Destination” – a variation on the tune of “Amanda” that ends the first side and contains the lyric;

It’s not who you can be, it’s what you can see that takes you there, your destination…

In all, the theme comes off kind of new-age-y and forms a slight chasm between band and fan, especially during some of the more forgettable songs on the album’s second side, especially “To Be a Man” and the dreadful “Cancha Say (You Believe In Me)”.

However, the second side does contain a few highlights; the smooth and straight-foward rocker “I Think I Like It” and the pleasant closer “Hollyann”, which bleeds nostalgia for the 1960s and contains an interesting little organ solo in the middle, accompanied by little more than a strumming, acoustic guitar.

In the end, Third Stage would prove to be Boston‘s commercial peak. It would take yet another eight years for the band’s fourth album in 1994, Walk On (a project which, ironically, Delp “walked off”) and another followed near the end of the century. But Boston would never quite reach that sound again.

9 thoughts on “Third Stage by Boston”