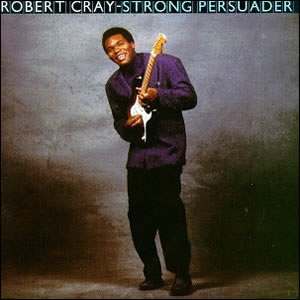 The 1980’s music scene is best remembered by most people as a time when synthesized sounds ruled the radio waves and the glitzy MTV videos of hair bands and rap and hip hop artists were all the rage. In this unlikely era of technology driven pop, Robert Cray helped rein in the appreciation of a new generation for the blues. Some have criticized his blend of blues, soul and rock as a homogenization of the blues but his contemporary style was easily accessible and entertaining to a wide audience. His Gammy winning 1986 release Strong Persuader is credited with helping the Blues find new life as it spawned a top-five hit with “Smoking Gun”, with a video also shared frequent MTV screen time with the likes of A-ha and The Pet Shop Boys.

Perhaps Robert Cray’s brand of electric blues might be the result of his diverse background. Though he was born in Columbus, GA, he was an “army brat” and was raised all over the country. He started playing guitar in his early teens while living in Newport News, VA and cites blues legend Albert Collins as a major influence. Later, he would collaborate with Collins on his album Showdown!, which won a Grammy itself in 1987. Cray also lists guitar greats George Harrison, Eric Clapton and B.B. King as some of his early influences.

His third major label release, Strong Persuader remains one of his best albums to date. The songs all revolve around a common blues theme of love gone wrong. While he may not possess a technically perfect voice, Cray is a superb vocalist, delivering precisely the right emotion whether it be specific levels of sincerity, sarcasm, or cynicism. The sound of the album is simple, crisp, and clean and never muddled. It is modern electric blues featuring Memphis horns, steady bass and drums, and Cray’s signature, attack-heavy guitar style with no wasted notes.

For how sanitized the may album sound, at its core Strong Persuader is really quite racy. This dichotomy is best portrayed on the song “Fantasized”, which contains some rather risque lyrics above an nonthreatening basic, soft-rock music track. If fact, “Strong Persuader” became a nickname for Cray himself due his skills at convincing young women as portrayed in the popular song “Right Next Door (Because of Me)” where he brags about his conquest being “just another notch on my guitar”.

The album’s opener, “Smoking Gun”, is perhaps Cray’s most popular song ever, accented by Peter Boe’s signature piano riff and a fine, “slow hand” guitar solo. The following song “I Guess I Showed Her” takes another musical direction, with a nice blend of cool jazz and funk, highlighted by the brass of Wayne Jackson with some ironic/comedic lyrics. Later in the album, Cray settles in to more traditional, guitar-driven blues and nearly-crooning vocals on songs like “I Wonder” and “New Blood”.

Throughout the rest of album, the songs vary with different combinations of these three styles, all held together by the consistent production of Bruce Bromberg & Dennis Walker. some of the highlights include the catchy and melodic “More Than I Can Stand” and the excellent “I Wonder”, with its totally unique solo technique which at one point seems to use alternate tuning and at another almost sounds like a banjo, and the cool lyric – “…Is this a dream or has Bob gone crazy?”

Inducted into the Blues Hall of Fame just last month (May 2011), Robert Cray gave us an interesting and entertaining album a quarter of a century ago, which remains one of his most popular. Since Strong Persuader, Cray has released 11 studio albums but none have been as popular as this 1986 tour-de-force.