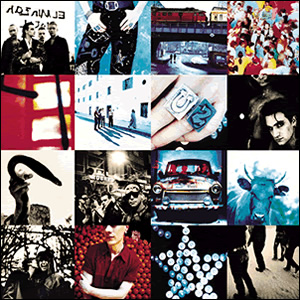 “The sound of four men chopping down The Joshua Tree.” This is how lead singer and lyricist Bono described the radical new approach that the established and successful band U2 took when putting together their 1991 album Achtung Baby. The album was produced following the group’s first extended break from touring and recording and it marked a distinct milestone in the evolution of U2’s sound.

This was the first full studio album since the blockbuster The Joshua Tree in 1987 and Bono felt that they were creatively unprepared for the phenomenal success of The Joshua Tree, which resulted in the critically panned soundtrack album Rattle and Hum in 1988. In October 1990, the group headed to Berlin to start work on this new album. On the eve of German reunification the band felt that recording there would be uplifting and inspiring. Instead, they found the vibe to be depressing (the studio was located in a former SS ballroom). Further, there was division growing within the band itself over the musical direction. Bono and lead guitarist The Edge were becoming influenced by recent fads such as the Madchester scene in England and the industrial rock movement in America. However, these dance-oriented beats and rhythms did not sit well with bassist Adam Clayton and drummer Larry Mullen, who felt their roles were being diminished within the band. The fact that Bono and The Edge were also writing the material in more isolation did not help matters.

The band was actually close to breaking up in Germany as ideas stagnated and disagreements escalated. But they were all brought back together by the nearly totally improvised “One”, where each member contributed on the spot to this excellent new composition. The band returned home to Dublin for Christmas 1990 where they all recommitted to a future with U2. The bulk of the rest of the album would be recorded in Dublin starting in February 1991.

The album’s title, “Achtung Baby”, is German for “Attention, baby!” or “Watch out, baby!”, and it was adopted by sound engineer Joe O’Herlihy during recording in the early Berlin sessions. Later in the process, the band decided on this as the title over more “serious sounding” titles that they were considering. The album was co-produced by Daniel Lanois, who was hands-on from start to finish and Brian Eno, who would work on the project intensely for several days straight and then take three or four weeks off in order to be able to come back and listen with “fresh ears”.

Upon listening to the album, the first thing you’re struck by is the sound – steady, almost techno beats, processed vocals, and very judicious use of the band’s previous biggest asset, The Edge’s signature riffs. For this album, the inventive guitarist used many different techniques and processing, most with stellar success, some with less.

Some of the most inventive guitars appear on the songs “Zoo Station”, “Love Is Blindness”, and the first hit from the album “Mysterious Ways”, which introduced the pop world to the “new U2”. Other songs used various inovative techniques as well. “Even Better Than the Real Thing” starts with wild synths and then uses doubled up, octave vocals. “So Cruel” uses a simple piano riff with a modern dance beat. “The Fly” experiments with alternate personalities of Bono, each portrayed by distinctive vocals built by cadence and effect. While the music fluctuates between alternative and R&B. “Who’s Gonna Ride Your Wild Horses” starts as a piece of doomy, space age, psychedelia then morphs into a decent pop song that really hits a sweet note during the bridge with the high-pitched Bono vocals.

Other song highlights include the cleaver and inventive “Until the End of the World”, which portrays an imagined conversation between Jesus Christ and his betrayer, Judas Iscariot, while moving towards the traditional U2 sound musically. “Tryin’ to Throw Your Arms Around the World” contains a calm R&B beat with just enough musical decor to make it really moody under the somber vocals.

The true great from this album, on a level with anything U2 has done before or since is “One” . This is a gem that really deviates from much of the rest of the album. It starts with a traditionally strummed acoustic guitar coupled with a nice, overdubbed electric riff and then kicks in with perfect rhythm accompaniment. Calm vocals become more agitated as the verses proceed until we reach a climatic banshee scream at the close. Further, this is the song that really saved the album and possibly the band. As The Edge recalls;

“At the instant we were recording it, I got a very strong sense of its power. We were all playing together in the big recording room, a huge, eerie ballroom full of ghosts of the war, and everything fell into place. It was a reassuring moment, when everyone finally went, ‘oh great, this album has started.’ It’s the reason you’re in a band…”

As the release date drew near, rumors of U2’s new direction leaked out and certain critics and members of the press began to preemptively trash the new album on hearsay alone. On the eve of Achtung Baby’s release in November 1991, U2 was more unsure and less confident than they had been for any previous work. However, once the actual music was heard, the reception nearly all positive by critics and fans alike, with Achtung Baby topping most “album of the year” polls and winning a Grammy.