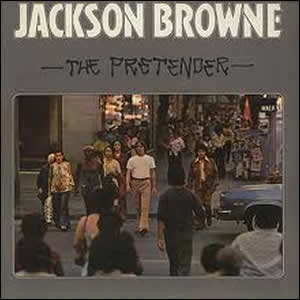 Written the the wake of a personal tragedy, The Pretender, by Jackson Browne brings the listener on a subtle journey. It begins by exploring the heavy burdens and trials of life from which you must fight your way through to the elusive goal and the ultimate reward – happiness. The whole thing is obviously written by someone in the midst of great despair, but the overall theme is that things will somehow work out despite all the darkness and pain. A thought that somewhere along the line you’ll be rewarded for simply doing the right thing as long as you keep plugging along is a general theme of the album.

The Pretender was written and released months after the suicide of Browne’s first wife, Phyllis Major. Browne was left with their two-year-old son. Finding one’s way through darkness and heartbreak in life is the universal theme that gives this collection its staying power. While Browne had intentionally explored many dark issues on his first three albums in the early seventies, on this fourth album he seems to be desperately crawling in opposite directions by trying to make sense of it all and understand the larger picture.

Browne continues to use his signature style of Southern California piano-folk, there are many subtle intrusions that seep into these (largely) unassuming ballads. He plays on sonic dynamics from very simple melodies to much richer musical arrangements backing up a very specific type of poetic philosophy.

The album commences with “The Fuse”, a strong yet confusing song which may be interpreted in different ways by different people. It may mean the fuse that leads to the ultimate destruction or it may simply mean light the fuse to happiness and you are what you choose to be. The music consists of choppy little piano note riffs with nice lead guitar overtones by David Lindley. “Your Bright Baby Blues” is a more measured, standard song with dynamic vocals by Browne and another nice guitar lead, this time by Lowell George, with lyrics that speak of a temporary fix but persistent issues;

The Pretender contains a few tracks with cross-genre and diverse sounds. “Linda Paloma” has an interesting Mexican sound with a harp by Arthur Gerst and Roberto Guiterrez on guitaron. However, this song does tend to drone after a while. “Sleep’s Dark and Silent Gate” is a more succinct ballad with thick strings backing the core piano, bass, and acoustic guitar and speaks of a sudden awakening after years of sleepwalking through life, apparently a direct reference to his wife’s suicide.

“Here Come Those Tears Again” was co-written by Browne’s Mother-in-law Nancy Farnsworth. Although it is probably the closest to a “pop hit” on the album, it is very poetic in its approach with a strong musical arrangement and well blended guitar and piano. “The Only Child” apparently speaks of Browne’s son and is another “journey” kind of song with a fiddle by David Lindley throughout. “Daddy’s Tune” starts as a basic ballad with some very good piano that later breaks into a highly enjoyable, upbeat, horn section.

The closing title song is the best song on the album as well as the theme which ties it all together. It is a multi-part, lyric rich, mini suite, which is basically poetry set to music. It speaks of getting lost in the details while losing sight of the big picture, starting young and strong but ending up living the life of a “happy idiot” with “paint by number dreams”. Browne began recording “The Pretender” in the late winter of 1975, after first joining up with rock critic and producer Jon Landau. A few weeks into the song’s development, Browne’s wife committed suicide, changing the perspective completely.

Still, the song and album ends with a tinge of hope;

Are you there? Say a prayer for the pretender /
Who started out so young and strong only to surrender…”

The last lines of the song are a call to wake up and start realizing your dreams before it’s too late – time marches and what you choose to do with your time is up to you – don’t let it pass you by or you will be the Pretender.