The Beach Boys Today! was the 1965 eighth overall studio album by The Beach Boys. It marked a subtle shift in production technique and lyrical themes for the California based group. These changes were brought together by producer, composer, and vocalist Brian Wilson who had decided to move away from the surfing / cars / girls themes that had brought super-stardom to the group in the early 1960s and moved towards more mature themes with richer accompanying orchestration. This shift did not seem to deter the record’s pop success, as it reached the Top 10 in album charts on both sides of the Atlantic and spawned a trio of hit singles.

The origins of the Beach Boys date back to the late 1950s in when teenage brothers Brian, Dennis Wilson and Carl Wilson began mimicking the harmonies of vocal groups such as the Four Freshmen. Soon the Wilsons’ cousin Mike Love and Brian’s high school friend Al Jardine were writing and seeking a publishing deal under the name “The Pendletones”. In 1961, the band recorded a demo of their first original “Surfin'” and the following year the group signed with Capitol Records under their new name, The Beach Boys. Over the next two and a half years the group released seven studio albums and had seven Top 10 hits in the United States, an incredible streak of productivity and success which left the group exhausted. This stress, along with the difficult decision to dismiss the Brothers’ father Murray Wilson as the group’s manager, ultimately contributed to Brian suffering a panic attack in late 1964.

During the recording sessions for The Beach Boys Today! in January 1965, Wilson announced that he would stop touring with the group and concentrate solely on songwriting and record production. Brian also wanted to start separating the Beach Boys from their surfer image and more towards complex music with the use of richer instrumentation. When released in March 1965, The Beach Boys Today! featured a first side with mainly uptempo songs and a second side with mostly emotional ballads.

The album starts immediately with “Do You Wanna Dance?”, a late fifties song by Bobby Freeman, updated with rich production and featuring drummer Dennis Wilson on lead vocals. Despite being released as the B-side of a single, this Beach Boys’ version reached the Top 20 in the United States. “Good to My Baby” follows with an interesting rotating guitar riff and dual lead vocals by Love and Brian Wilson. “Don’t Hurt My Little Sister” is the most complex composition of the early tracks, an upbeat rocker with a bright guitar riff, that dissolves into an air of sadness as the descending chorus pattern progresses. The lyrics are based on Wilson’s complicated feelings for his wife Marilyn and her younger sisters.

“When I Grow Up (To Be a Man)” is a crossroads song lyrically as Brian discusses his anxieties about becoming an adult. Musically this track is rich with melodic harmonies and with the presence of a vibraphone throughout. “Help Me, Rhonda” is the definitive hit from the album as well as the first and only song to reach three minutes in length. With Jardine on lead vocals, this single reached number one in the US, the second chart-topper by the group. On “Dance, Dance, Dance” the group progresses further in the pure rock direction with the strong presence of co-writer Carl Wilson’s guitar and a consistently upward motion overall. 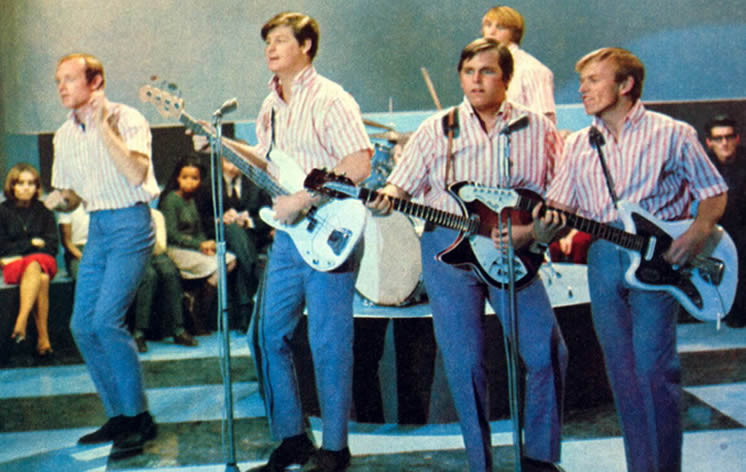 The ballad filled second side begins with “Please Let Me Wonder”, with this mellow track featuring a Western-like backing and the usual over-the-top harmonies. The William Tyus cover “I’m So Young” is a doo-wop ballad with Phil Spector-like snare/tambourine hits, as “Kiss Me, Baby” vocals are exquisitely delivered. On “She Knows Me Too Well” Brian Wilson stretches the upper limit of his vocal range in the choruses, while “In the Back of My Mind” is a complete departure from the rest of the song as Dennis Wilson providing solo lead vocals on this melancholy track in 6/8 time.

The Beach Boys Today! was a commercial success as it climbed into the Top 10 on both sides of the Atlantic. Brian Wilson was replaced temporarily by Glen Campbell and then permanently Bruce Johnson for live performances while he delved even deeper into developing new studio methods.