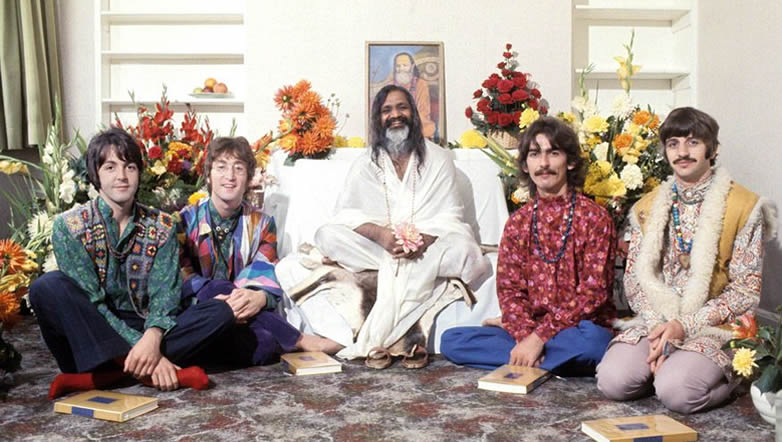 In early 1968, all four members of The Beatles traveled to northern India to attend a Transcendental Meditation training course with Maharishi Mahesh Yogi. While George Harrison, John Lennon, Paul McCartney and Ringo Starr all arrived at the Maharishi’s ashram in Rishikesh in mid-February with optimism and enthusiasm, they departed at different times and with differing opinions of the positivity of the experience. In any case, prolific songwriting took place in India, much of which would be reflected on The Beatles (white album), which was released later in 1968. In that sense, this historic event remains musically significant, no matter the actual merits of the Maharishi or Transcendental Meditation itself.

This trip followed the adventurous and tumultuous year of 1967. That year was the group’s first full year without touring, where they produced and recorded the iconic classic Sgt. Pepper’s Lonely Hearts Club Band, were the centerpiece of a worldwide television special, and starred in their third feature film, Magical Mystery Tour, and its recorded subsequent soundtrack. On the darker side, 1967 saw members of the group heavily experimenting in drug use and losing their long time manager Brian Epstein, which ultimately saw the band to begin fracturing professionally. Before departing for India, in what originally was to be a three month stay, the group recorded a few songs for single release. McCartney’s “Lady Madonna” was chosen as the A-side of the single, beating out Lennon’s “Across the Universe”, a version of which later appeared on  Let It Be. The single’s B-side was Harrison’s “The Inner Light”, which was partially recorded with several Indian classical musicians in Bombay, India in January during the sessions for Harrison’s Wonderwall Music soundtrack album. This is notable as the only Beatles studio recording to be made outside Europe and it set a nice vibe as the members publicly departed for India. 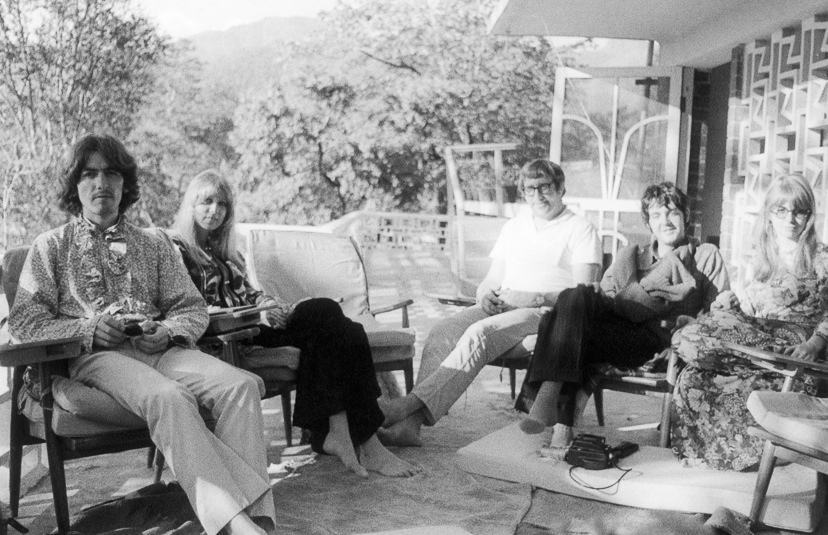 A year earlier, Harrison’s wife Pattie Boyd came across a newspaper advertisement for Transcendental Meditation classes and she and her husband soon became part of this movement. In the summer of 1967, Harrison had recruited the other members of the Beatles to attend a lecture that the Maharishi gave in London, followed by a 10-day Spiritual Regeneration conference in Wales. McCartney reflected that the group had been “spiritually exhausted” and, while at the conference, the group members committed to giving up drugs. However, their stay at the conference was cut short when news of Epstein’s unexpected death reached the group. Before departing Wales, the Maharishi invited the Beatles to stay at his ashram in Rishikesh in the near future.

The group arrived in India in mid-February 1968, along with their wives (or girlfriend in McCartney’s case), along with numerous assistants, reporters, celebrity meditators and even some contemporary musicians like Donovan and Mike Love from The Beach Boys. They flew into Delhi and then rode by taxi the 150 or so miles to Rishikesh, walking to the ashram by crossing a footbridge over the Ganges River and up a hill to the property.

Located in the “Valley of the Saints” in the foothills of the Himalayas, this 14-acre ashram was built 5 years earlier in 1963 and it was funded through a $100,000 donation from American heiress. While there, life was comparable to that of a summer camp, starting with a communal breakfast followed by morning meditation and the occasional lecture from Maharishi. And at the end of the day, the musicians would often jam. 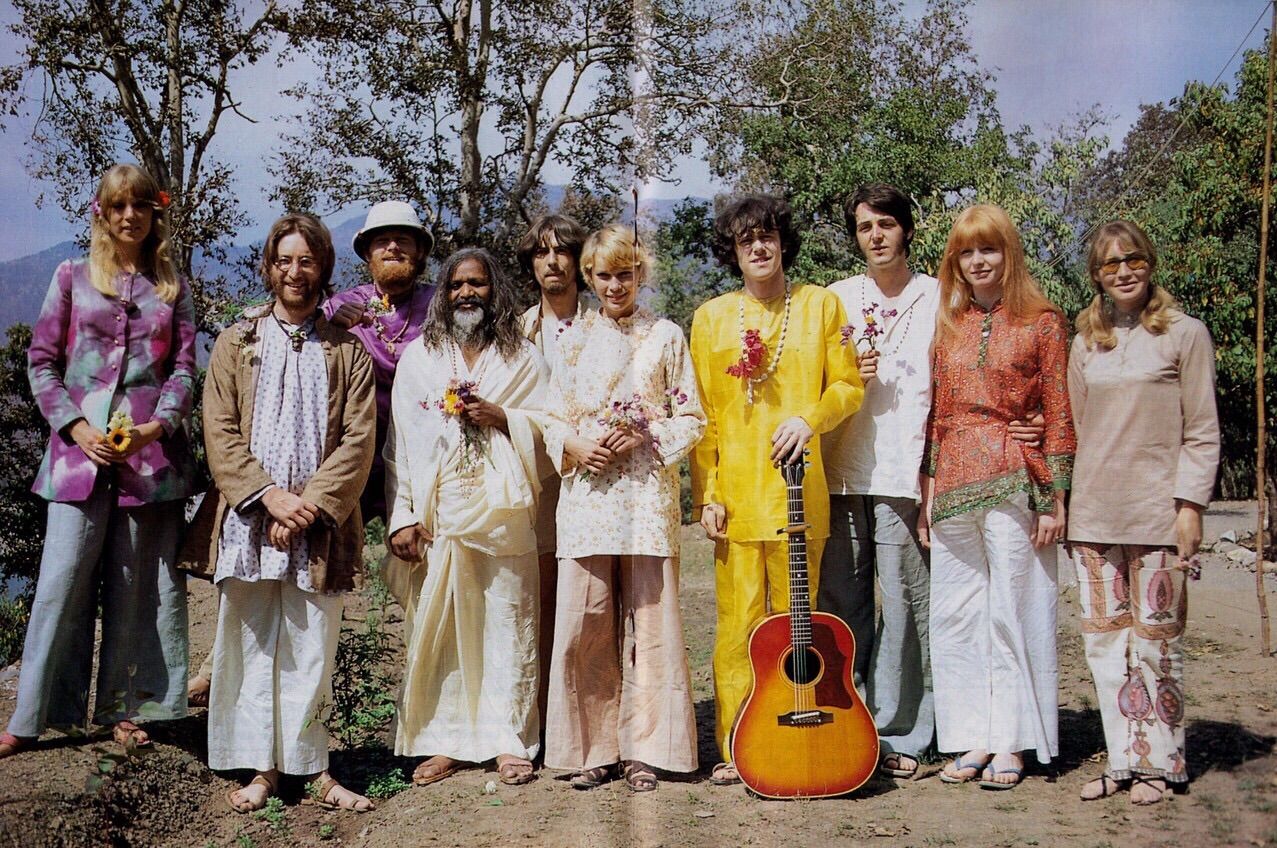 Donovan taught John Lennon a guitar finger-picking technique that they later used on the songs “Julia” and “Dear Prudence”, the latter of which was a direct narrative about Mia Farrow’s sister who caused concern by locking herself inside and intensely meditating for weeks on end. Starr completed his first solo composition for the Beatles, “Don’t Pass Me By”, which he had begun writing way back in 1963. McCartney was prolific as usual with songs forming from the parody “Rocky Raccoon”, which he wrote to entertain others at dinner, to “Mother Nature’s Son” which was directly inspired by one of the Maharishi’s lectures, to “Back in the USSR” which he wrote in Love’s presence as an interpretation of the Beach Boys style. In fact, plans were briefly discussed for a possible concert in Delhi to feature the Beatles, the Beach Boys, Donovan, and Paul Horn.

Compared to the regular attendees, the Beatles were given some additional perks such as heated tents and on-demand private lessons from the Maharishi. Still, Ringo Starr and his wife Maureen were never quite comfortable with the retreat as Ringo had food allergies and Maureen had a deathly fear of insects. So, after just 10 days, Starr was the first Beatle to leave on 1 March. McCartney and his girlfriend Jane Asher left a few weeks later in mid-to-late March, causing slight derision by Harrison and Lennon who questioned his commitment. Lennon had wanted to invite his new love interest, Yoko Ono, on the trip but feared a confrontation with his then-wife Cynthia and therefore declined to do so. Nevertheless, the Lennons effectively split up on this trip as John moved into his own room about a week into the retreat. 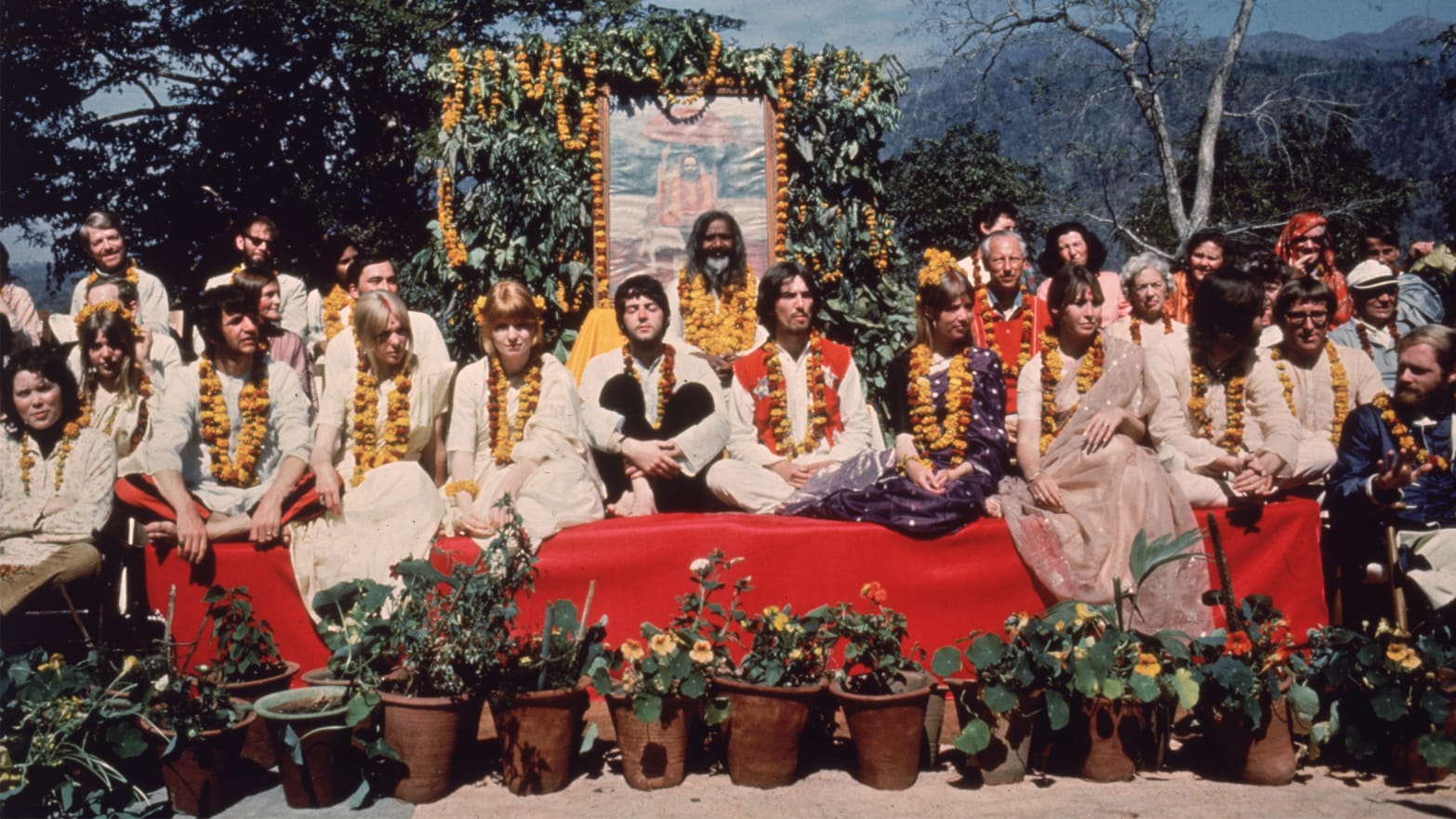 In early April, the Maharishi announced plans to move the whole retreat to Kashmir, a higher and cooler altitude as the summer months approached. Lennon and Harrison were planning to follow this course to the end, but changed their plans abruptly on April 12th, following rumors of the Maharishi’s inappropriate sexual behavior towards female students. The night before Lennon and Harrison sat up late discussing the Maharishi and decided to leave first thing in the morning. The final two Beatles and their wives left hurriedly and while waiting for their taxis to take the long drive back to delhi, Lennon wrote “Sexy Sadie”, a direct indictment of the Maharishi.

With the Beatles’ quick departure and implicit denunciation of the Maharishi, his rapid rise to fame abruptly ended. Whether or not the rumors about his misconduct were in fact true, remain in dispute to this day. Harrison later apologized for his and Lennon’s abrupt departure and he would later organize a 1992 benefit concert for the Maharishi-associated Natural Law Party. In 2007 McCartney took his daughter to visit the Maharishi, a year before his death in 2008. After a few years of abandonment, the ashram was opened to the public in 2015 and renamed Beatles Ashram.

Since they permanently gave up touring in 1966, this trip to India would be the last time all four Beatles traveled together outside of the UK. While their cohesion as a group began to deteriorate shortly after until they ultimately broke up two years later, the Beatles made a good faith effort to reach a higher understanding. In all, the group members wrote nearly 50 songs in India, some of which were published after the band’s breakup. 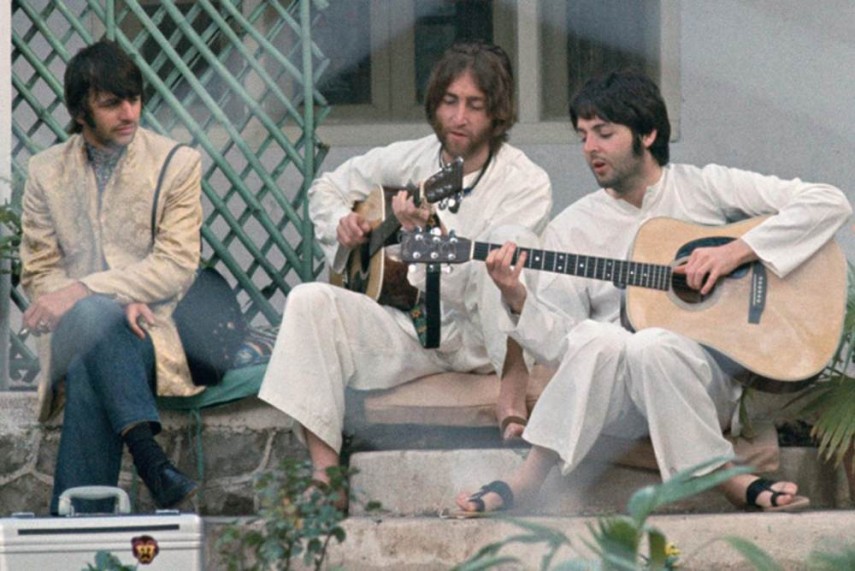 List of songs written by the Beatles in Rishikesh, India 1968

Released on recordings outside the Beatles: